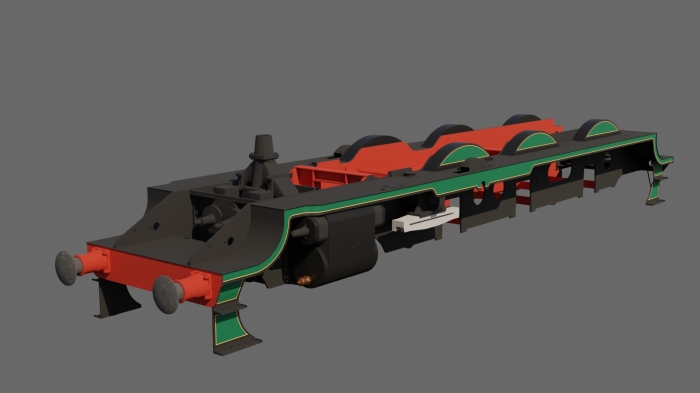 Hi everyone, hope you’re staying safe and well during these uncertain times. The end of November last year saw the release of the SE&CR ‘H’ class add-on and I must say thank you to everyone who has purchased the add-on so far, I hope you’re enjoying it.

With the ‘H’ class done it’s straight onto the next project the Lord Nelson class.

Examining drawings held at Search Engine in York has been an immeasurable help in finding some variations and details that would have otherwise been impossible to identify. So having got some new higher resolution drawings into Blender, the first step was to create as many animation rigs that I could without a physical model present. As a result I now have a rig for all four sets of valve gear, the cylinder drain cock linkage, the dampers and sander linkage.

With that accomplished, onto the modelling. Some like to build a complete base model and then in effect graft variations onto that model. Personally I prefer to have all the variations for a particular component modelled, ie all of the cylinder types, as it helps me ensure that everything fits together correctly.

So the current state of progress:

It might seem unbelievable, but in just these pictures I could show over 20 variations. Most are cylinder/blastpipe changes, but a few are frame differences.

You wouldn’t think the locomotive frames would have much in the way of variations, but steam locomotives have a knack for surprising you. As just one example of frame variation compare this photograph of 850 Lord Nelson with 857 Lord Howe. 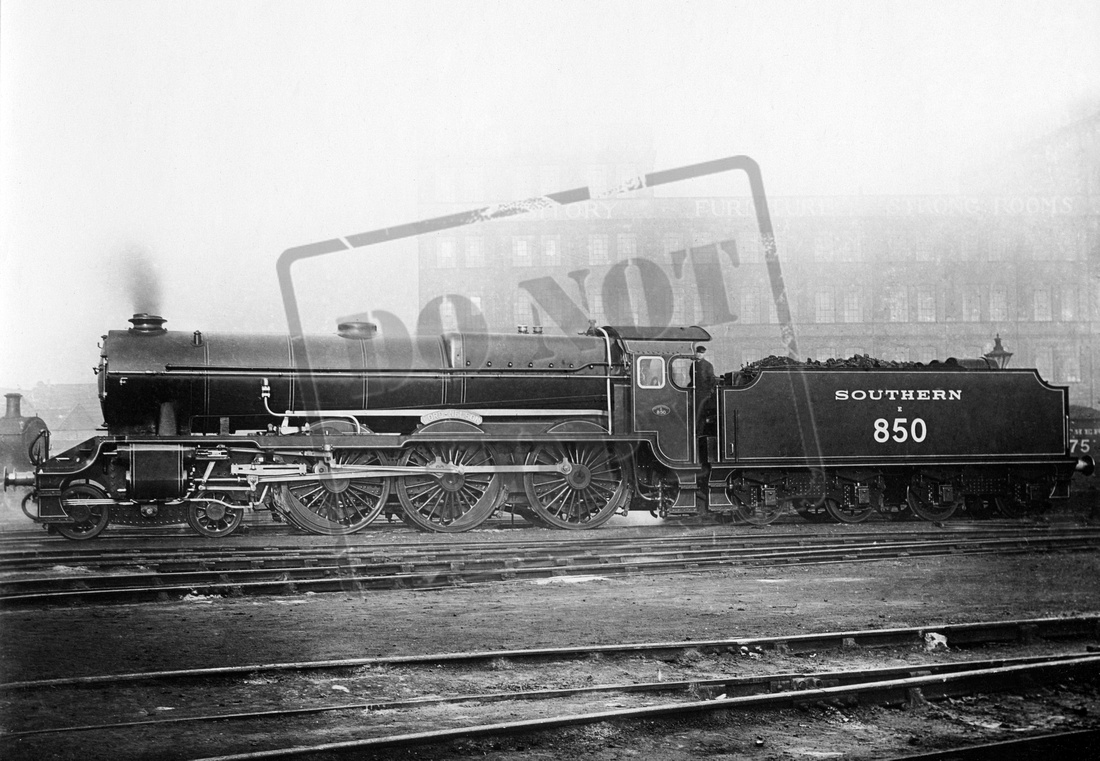 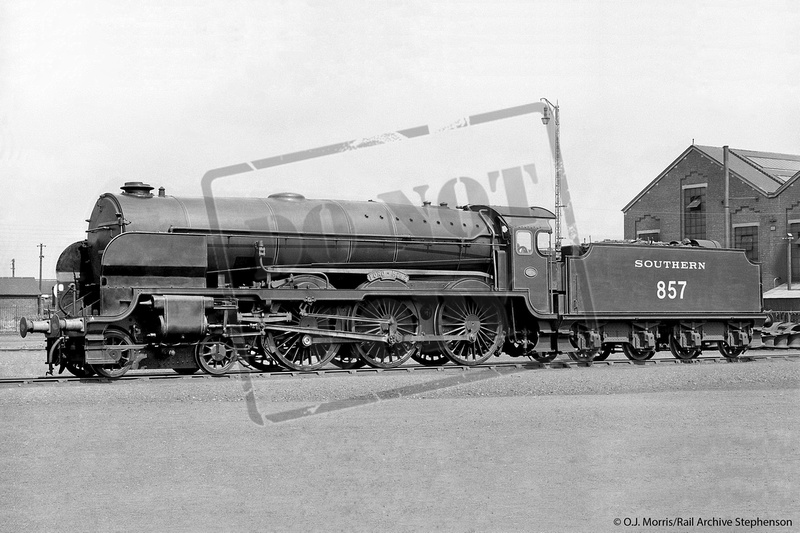 Focus on the lightening hole between the middle and rear driving wheels. On No.850 this was a stadium shape (it is a little tricky to see on the photograph, look just above the coupling rod), whereas on every other member of the class a circular hole was made in the frames. You might easily miss that detail, but once you’ve seen it you can’t ignore it. Yet amazingly not one of the books about the class that I’ve read has pointed this detail out.

As I mentioned previously the drawings held at Search Engine have been a real help. If I have a drawing I don’t have to guess the dimensions, though interpreting a 2d drawing with no photographs is a challenge in itself. One of those challenging components was the Kylchap blastpipe.

As can be seen from the finished product, the curves in all three directions made it a difficult object to make, but the results more than justify the effort.

In other SLC news…

I’m pleased to say that the U class add-on is back on the website. The add-on was withdrawn in November 2018 due to a couple of issues being reported by customers. At the time I wasn’t able to fix them, but due to the influx of enquiries about the add-on as it is used in a number of scenarios that are available, I took another look. While I haven’t been able to fix all of the issues, enough has been done that I can justify putting it back on sale. However, the U class add-on is now approaching ten years since it was released and the add-on is not up to the standards of current SLC add-on’s. Therefore the re-release has a caveat. The add-on is ONLY intended for use as AI traffic in scenario’s. If you choose to use the add-on as a player-driven engine you will only be able to drive the engine using the keyboard or the HUD as I was unable to fix the inability to move the cab controls with the mouse. I can still only offer limited technical support.

While I won’t be posting every week, or indeed, every month, as progress on the Lord Nelson continues I plan to post an update whenever I can. Until next time … 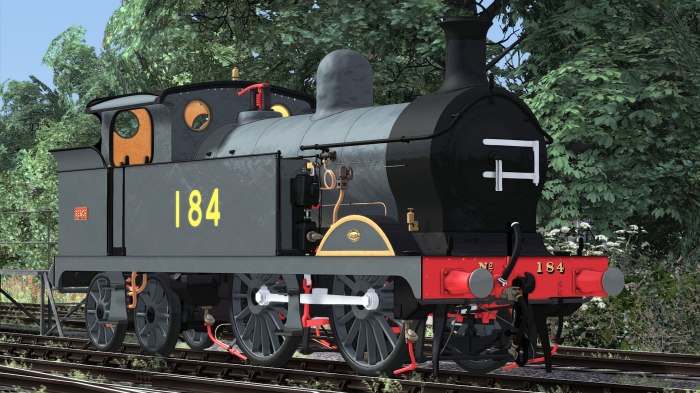 Well, I haven’t done one of these in a while, let’s see how rusty I am!

I can only apologize for my year of silence. Rather than creating a complete locomotive and then adding the variations and liveries, the way I tend to work is to create all the variations simultaneously; that way I can check that everything fits together correctly. The downside is that I don’t have any complete in game screenshots to show until shortly before the model is complete.

The ‘H’ class has been a bit of a rollercoaster to create. I’ve mentioned previously that some of the variations and changes which will be included with the add-on have never, as far as my research has been able to ascertain, been identified. The Search Engine archives at the National Railway Museum have been very helpful in ensuring that items like the pipes for the Westinghouse brakes, vacuum brakes and steam heat system, are in the correct places.

However, while examining some original drawings last year for the Lord Nelson add-on, I took the opportunity to look at the drawings of the cab, tank and bunkers for the ‘H’ class. The result of this was that I realised my model did not match the stated dimensions. In some places the difference was less than 1/4 in but in others was close to or over 1 in. At first glance that might not seem a huge amount, but the dimensions of the cab affect the position and dimensions of other components which in turn impact other parts, and soon what started as a 1 in difference has increased to 2 maybe 3 inches. Therefore, I took the decision to rebuild as many components as was necessary to reduce the dimensional differences, which in the end, resulted in around 75% of the model being rebuild or modified. But the results were, I think, worth it.

The SE&CR austerity grey livery, has quickly become one of my favourites, there’s something purposeful and workman like in it’s appearance.

I can’t give an exact date of completion for the add-on as there’s a number of new techniques that I’m testing in addition to the normal development cycle.

However, work has not been solely focused on the ‘H’ class. As I mentioned previously, research on the Lord Nelson class has included viewing original works drawings. Cataloguing the variations for any locomotive add-on is a time consuming task, but with the Lord Nelson’s it’s made even harder because of the more than 200 photographs I have to go through, many of which don’t have the date or year the picture was taken. But in the meantime, I decided to make a start on building what components I could with the aid of the original works drawings I viewed at the NRM. The first major component to be nearing completion is the cab for No. 850 when it was brand new in August 1926.

While this blog post isn’t a “The H class is now available”, I hope it’s given an insight into why things take longer than I want them to. I’m continually learning new things as a developer, where would the fun be if we didn’t keep learning.

One aspect of Train Simulator that I’ve been dabbling with recently is scenario creation. You may have noticed that there is a new section on the SLC website for scenarios. Here I’ll be uploading occasional scenarios that I’ve created and hopefully you’ll enjoy playing.

Hi everybody. I thought it was about time I wrote another blog post, so here we go.

Work on the ‘H’ class continues apace. January has been a busy month with a lot accomplished. Unfortunately though, I don’t have any in game screenshots to show in this blog post.

One reason I’m so excited to be bringing you the ‘H’ class is because of the little gems of new information that I’ve been able to uncover. There is precious little published, detailed, information on the history of the class besides D. L. Bradley’s The Locomotive History of the South Eastern & Chatham Railway from 1980. However, looking at photographs of the class during their working life has revealed several variations which have, as far as I have been able to ascertain, have never before been revealed in books or magazine articles.

It’s much the same story with the ‘Lord Nelson’. Research, which has included visiting the National Railway Museum to view original works drawings, has turned up a number of new variations/changes which haven’t been mentioned before.

Hopefully I’ll have some screenshots to show in the next blog post so keep checking the website.

It’s been a while since the last blog post, so I though it was about time I gave an update of what’s been going on in the SLC workshop.

It’s now been 2 months since the release of the ‘T9’ and a big thank you must go to everyone who’s purchased the add-on, and also to those who have offered feedback.

As a result of said feedback I’m currently working on what will become V1.3 of the ‘T9’ add-on. While there will be a number of minor niggles fixed, the vast majority of the update will be adding new sounds and scripts. If you’ve purchased the ‘T9’ and have any feedback, then NOW is the time to send it in.

As well as the new sounds and scripts already mentioned the update will also add the 2 variants of the Drummond 3,500 gallon six-wheeled tender. Work on the 14 ft. wheelbase version is progressing well and a couple of renders are shown below.

I don’t know how long it will be before the update is released, so keep checking the blog for further updates.

It might seem odd that in 2016 I was showing renders of a nearly complete Lord Nelson model and now seem to have reverted to the early stages of construction. The fact is that I’ve completely restarted the locomotive and tender models due to new research and new 3D modelling techniques that I’ve learnt while building the ‘T9’.

Work on researching the locomotive modifications is nearly complete, and work is well underway on the 4 different tenders.

Hopefully it won’t be too long before I can show the first renders of the locomotive model.

That just about wraps up this post, thank you for reading.

Two blog posts in a week! What is going on!

Many thanks to everyone who has purchased the ‘T9’, it seems to have been received quite well and I’m always grateful for any feedback that you send me. Don’t forget you can get in touch via the contact us page on the website or via email: steamlococollection@gmail.com

As the result of said feedback, I’m pleased today to release V1.1 of the ‘T9’ add-on.

The following changes/additions have been made:

Sincere apologies for this blunder.

Photographs that I’ve not come across before have shown that most the of the ‘T9s’ to receive the second emblem, received the incorrect emblem with the lion facing forward on both sides.

Apologies for not adding this to the manual in the first place. There are also instructions on how to get the crew to appear in the cab.

The No. 120 preserved liveries are unaffected.

Hopefully any issues with filling the tenders should be gone.

This turned out to be a conflict in the control part of the locomotive blueprint, all sorted now though.

I’m also pleased in this blog post to show of the first renders of the Maunsell 5,000 gallon flat-sided tender which will be included in the upcoming Lord Nelson add-on. These tenders were also coupled to the ‘S15s’ and a number of ‘N15s’ during the years. Work has also started on the smaller 4,000 gallon tender and I hope to show some renders of that in the near future. 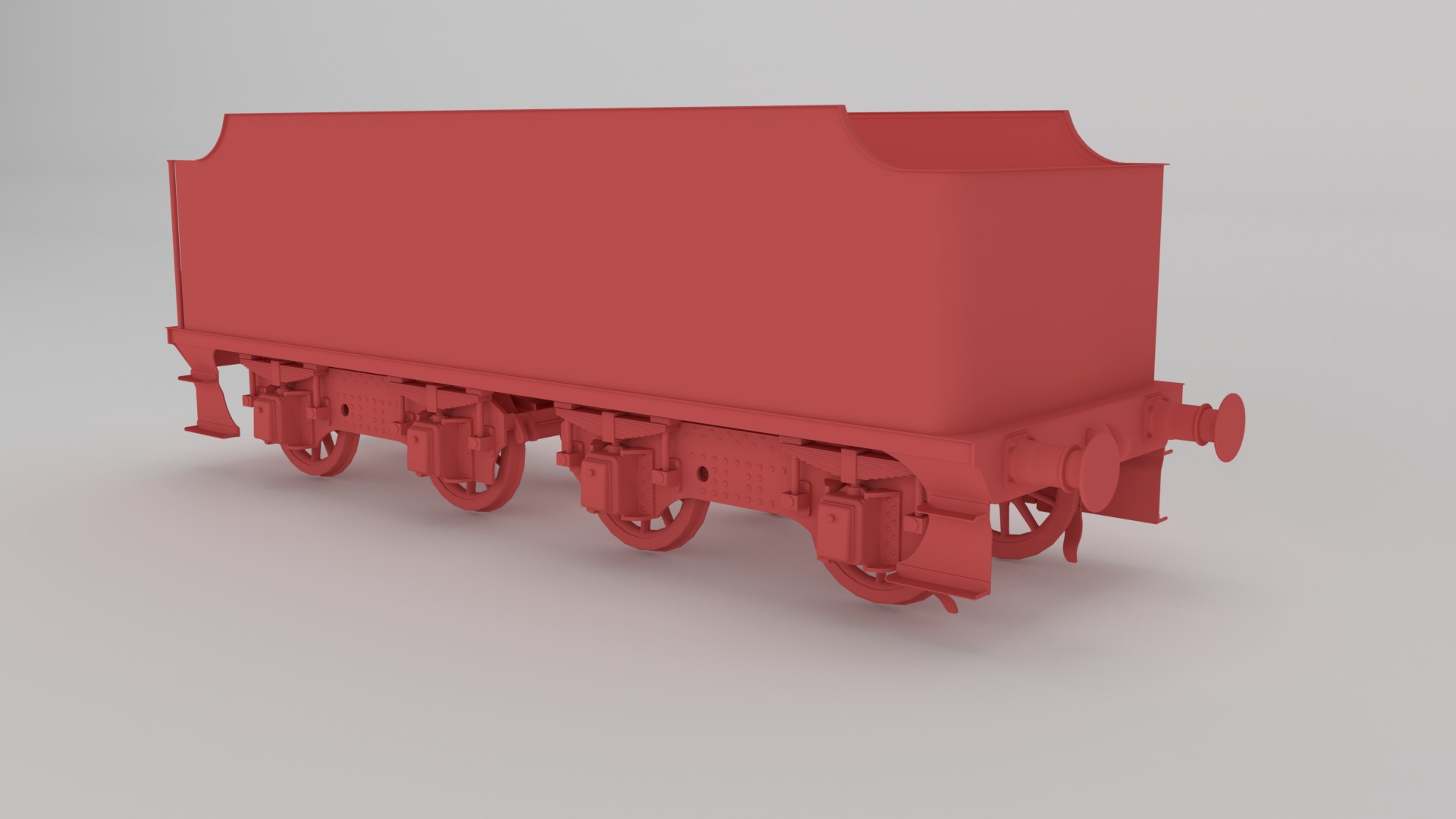 Thanks for reading and until next time …